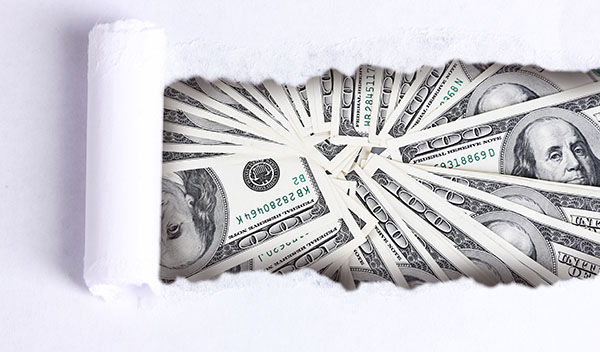 The amount of money is staggering…

Nationwide, states hold tens of billions of dollars… and counting.

The number of people owed money is more than 100 million and growing.

In New York alone, the accumulated treasure trove has ballooned to $17 billion. Divided up between New York’s roughly 20 million citizens that amounts to $850 per person.

In Minnesota, it’s a very similar story. Former Department of Commerce Commissioner Mike Rothman estimated just a couple years ago that 1 in every 20 Minnesotans have money being held for them… and this is despite the fact that the state returned $157 million from to 2010 to 2015.

What is all this money, and where is it coming from?

It’s unclaimed property – usually in the form of good ol’ cash – and every state in the country has hundreds of millions or more waiting to be collected.

We’re talking about money or goods from accounts surrendered by banks, insurers, brokerages municipalities, utility companies and countless others that tried but failed to find the rightful owners.

Oftentimes, they’re unclaimed because people die, move without leaving a forwarding address, neglect to request a final paycheck, or forget about a security deposit they paid or bank account they opened.

Not only is the total amount of funds staggering… but some of the amounts that are due to individuals like you and me are shocking.

No matter who you are or what your background, I believe there’s a very good chance you could collect some of this.

A few years ago, a Connecticut resident claimed an astounding $32.8 million! This was due to proceeds from the sale of nearly 1.3 million shares in a company, which had been forgotten in the recipients’ deceased fathers’ pension fund.

(Speaking of pensions, according to the Pension Benefit Guaranty Corporation, there are millions of dollars in pension benefits currently owed to some 80,000 people across the country.)

One of the more highly-publicized recent “claims” was a Washington D.C.-area butcher who was able to collect an extraordinary $401,982.

Prior to doing what we’re about to show you… this man had no clue that kind of money was out there waiting for him.

Meanwhile, at The Oxford Club, several employees – much to their surprise – found their own unexpected amounts. One of our marketers, Chris, got $1,700 from the college he attended. A copywriter found several hundred dollars that a public library owed his father. And another employee found money for both of his in-laws.

And then there’s that email we received from a skeptical Oxford Club Member. He found seven accounts under his father’s name and one under his own!

Essentially, millions of dollars go unclaimed because beneficiaries of wills and insurance policies have no idea they’re recipients, and the executors of these policies couldn’t locate them.

The aforementioned Rothman revealed that even the late musician Prince, who lived in Minneapolis, has more than $15,000 owed to him – and more checks keep coming in.

That just goes to show you that no matter who you are or what you do, there’s a possibility that money has been lost and is being held somewhere for you, a family member or a friend.

A Stockpile of Forgotten Money

Generally, once an account is classified as dormant (no activity over a long period of time) banks, insurers, companies and government agencies are supposed to try to notify accountholders by mail and then publish their names in local newspapers. If these efforts fail, the organizations surrender these dormant accounts after two to five years to the comptroller’s office.

The states are also charged with trying to find the owner through websites, newspaper ads and booths at events like state fairs. However, because this cash can be used to fund government operations, there’s no real incentive for officials to find the rightful owner.

(Some states, admittedly, are making a real effort. For instance, Wisconsin’s Department of Revenue has established an unclaimed property-matching program that uses the agency’s tax records to proactively locate owners of unclaimed property.)

The result? Every year, the vast majority of unclaimed funds remain in state coffers. It’s estimated that about 1 in every 10 people in the U.S. have unclaimed property.

Plus, hundreds of millions of dollars are added to the “pot” every year, with far more going in than coming out. That’s because very few people are aware of the simple procedure to determine if they have money owed.

But there’s an easy way to find out if you’re due some “free money.” And don’t think it’s too late to check. There’s no statute of limitations here. The money belongs to the owner (or their heirs) in perpetuity.

How Much Are You Owed?

The first place you should search is www.missingmoney.com.

This website is officially endorsed by the National Association of Unclaimed Property Administrators (NAUPA), which works on behalf of states to help residents claim property that belongs to them. 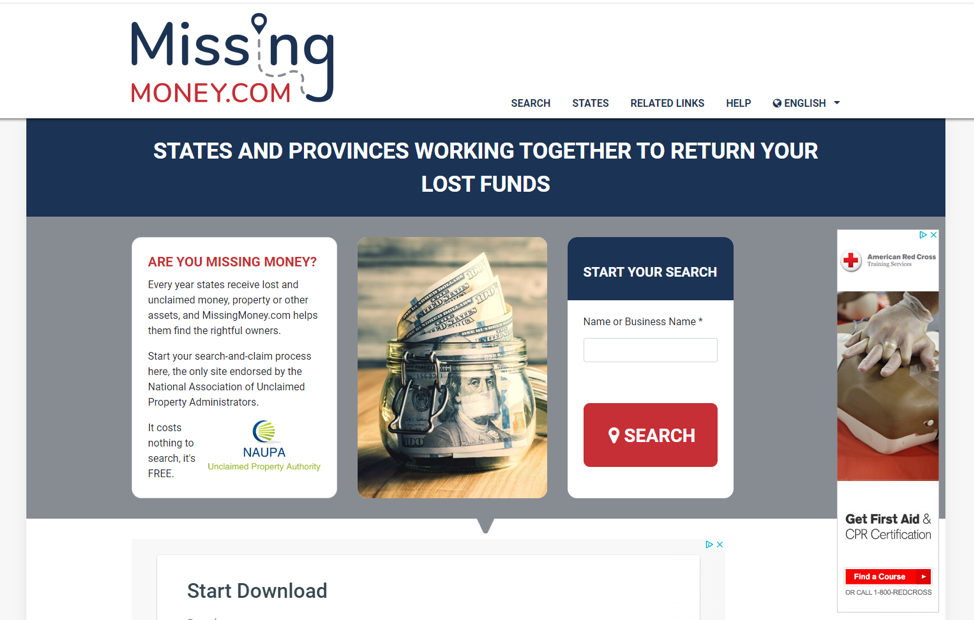 Clicking on the “Search” tab will take you to this page…

Simply enter your information and see what comes up.

And if that doesn’t produce anything, there’s another step you can take…

Click on the “States” tab at the top of the page. It will take you to a map of the U.S., Canada and Puerto Rico. 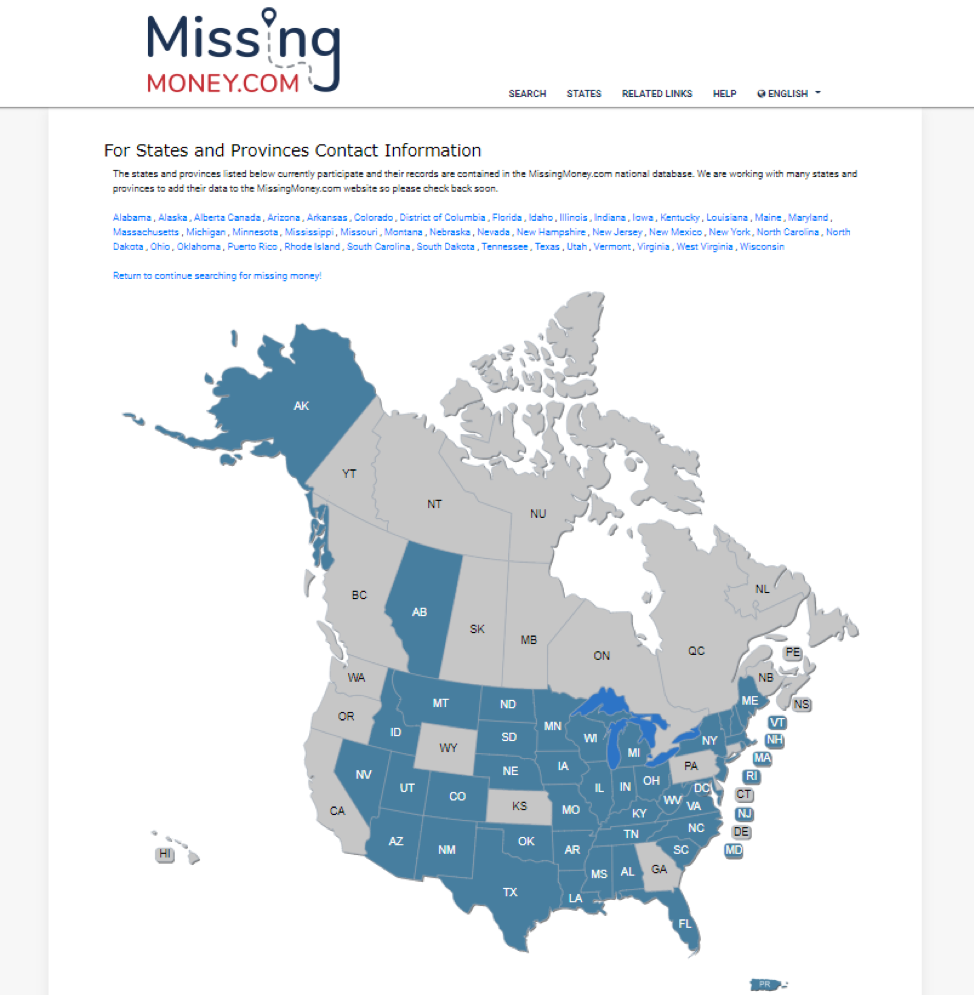 Clicking on the state, province or territory you want will take you to its respective missing money website run by its local government. That’s where you’re most likely to find the most up-to-date information.

Every single person in America has a right to make a claim. And these programs are available in all 50 states, plus Washington, D.C., Puerto Rico and the U.S. Virgin Islands.

Beware of people who offer to send you unclaimed money for a fee. These scammers use a variety of tricks to get your attention, but their goal is the same: to get you to send them money. Government agencies won’t call you about unclaimed money or assets. The Federal Trade Commission provides tips on how you can avoid government imposter scams.

You check not only for yourself, but also for a spouse, sibling, parent, friend… you name it. In fact, you really want to search for your parents and grandparents, since that’s where the bigger money can be found.

The best part is that you can do this without ever entering a Social Security or account number. Rather, you search the system by name and then verify that it’s really you by checking to see if you’ve ever lived at the corresponding listed address.

If you don’t find anything through the options listed above, don’t give up too quickly… There are many more places you could find unclaimed money.

One more important thing: There shouldn’t be any “fees” required to collect the money that’s rightfully yours.

There’s no cost for checking to see if you’re owed money, and there’s no charge for claiming it.

Plus, there’s no telling how much you could collect… so give it a try. It’s really easy.

What are you waiting for?

Legal Note: The Oxford Club is a financial publisher that does not act as a broker, dealer or licensed investment advisor. You should not consider any of the communications by our company and employees to you as personalized investment advice. Investment markets have inherent risks, and there can be no guarantee of future profits. Likewise, our past performance does not ensure the same future results. Any investments recommended by The Oxford Club should be made only after consulting your investment advisor and only after reviewing the prospectus or financial statements of the company.

Additionally, no person listed within our publications should be considered as permitted to engage in rendering personalized investment, legal or other professional advice as an agent of The Oxford Club. The Oxford Club does not receive any compensation for these services. Any individual services rendered to Members of The Oxford Club by those mentioned are considered completely separate from and outside the scope of services offered by The Oxford Club. Therefore, if you choose to contact anyone listed within our publications, such contact, as well as any resulting relationship, is strictly between you and the service provider.

We expressly forbid our writers from having a financial interest in their own securities recommendations to readers. All of our employees and agents must wait 24 hours after online publication or 72 hours after the mailing of printed-only publications prior to following an initial recommendation. The proprietary recommendations and analysis we present to Members is for the exclusive use of our membership. May 2022.