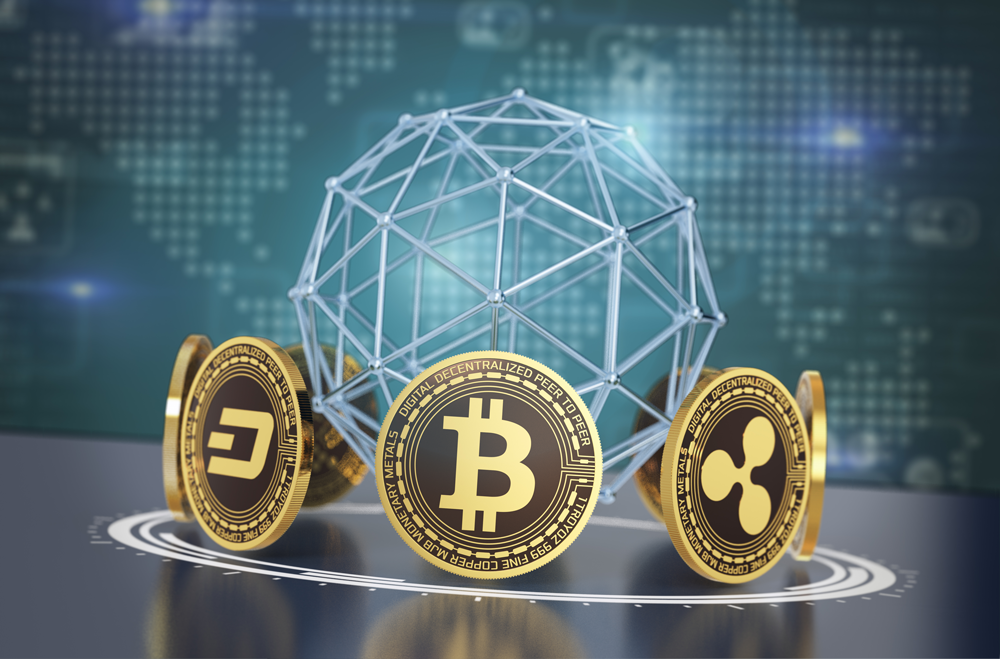 Cryptocurrency, particularly Bitcoin, has been one of the biggest stories in finance in the past year.

Many bets have been placed on each of them… but there is a way to profit from the cryptocurrency revolution no matter which crypto wins. You see, cryptocurrencies, like Bitcoin, are mined – not from the dirt but from cyberspace. They’re derived from a network of computers validating cryptocurrency transactions.

In order to mine cryptocurrency, you need some serious hardware. The run-of-the-mill laptop you can buy at a retail shop isn’t going to cut it – the heat generated by its struggling hardware will damage your computer in the long run or cause it to short-circuit or even blow a fuse in the short term.

The people who mine Bitcoin typically build their own rigs. They use top-of-the-line processors and next-generation graphics cards, and some even use water cooling systems. But things have gotten easier since the invention of the application-specific integrated circuit, or ASIC.

It used to be that crypto mining programs ran using a computer’s graphics card. That worked well enough, but when Canaan Inc. (Nasdaq: CAN) introduced the first ASIC, crypto miners finally had some dedicated hardware.

Canaan remains a leader in the ASIC industry today, and it’s the ultimate play for the digital gold rush.

Based in Hangzhou, China, Canaan is a premier integrated circuit company in the cryptocurrency mining space.

The company was founded in 2013 and introduced the first ASIC specialized for mining crypto. Its founder and CEO, Nangeng Zhang, is an expert in supercomputing with 11 years of experience in electronic device design and production.

Zhang is young – he received his Ph.D. in 2013 at Beihang University – and he has vision. He very well could be the next Steve Jobs, a young and ambitious tech entrepreneur who’s disrupting not just an industry but the institution of currency itself.

Because of him, Canaan has remained on the cutting edge of ASIC technology since 2013. It released its third-generation artificial intelligence (AI) chip just last year. 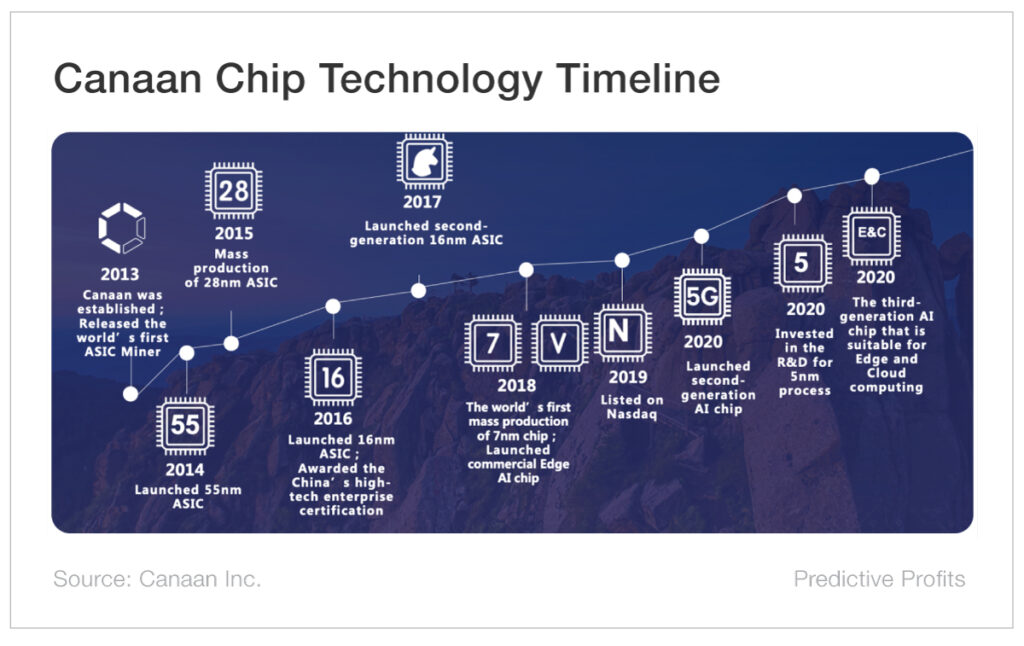 The company has two product lines: The Kendryte AI chip is exciting, but the AvalonMiner is Canaan’s bread and butter. It’s the flagship model and the pick Canaan is selling to crypto miners eager to get an edge.

See, crypto mining is a competition. Every node in the cryptocurrency’s blockchain network runs calculations to authenticate a transaction made with its cryptocurrency. The miners earn crypto as their reward for doing this…

But they need to verify 1 megabyte of transactions and be the first to arrive at the right answers to the numeric problems used by the network to authenticate transactions.

The answers to the numeric problems are 64-digit numbers called hashes. The faster your computer’s hash rate, the more likely it is that you’ll get the right answer first.

Avalon offers its users considerable advantages over the other million Bitcoin miners out there. So it’s earned Canaan some serious attention from crypto miners looking for an edge.

Once again, though, even with the edge Avalon gives them, there’s no guarantee they’ll strike a rich vein, so to speak. But that doesn’t matter to Canaan or to you. The company will have already made its money from the miners flocking to buy Avalon…

And there are already a lot of them. In 2020, it sold more than 6.6 million terahashes per second of computing power.

A Rising Star in the East

For a relatively young company, Canaan has done well for itself. It recently published its unaudited 2020 fourth quarter and full-year financials. Last year, it brought in $68.6 million in revenue, and its gross profits jumped to $5.8 million compared with a gross loss of $78 million in 2019. The company’s net losses narrowed to $33 million from a loss of $205.5 million in 2019.

Canaan’s costs also went down across the board. For 2020, total operating expenses decreased by 45.8%. The company has $60 million in cash and cash equivalents to fuel its growth alongside the cryptocurrency revolution.

Thus far in 2021, the company’s revenue visibility has improved considerably as a result of Canaan attaining purchase orders of more than 100,000 units of Bitcoin mining machines from North America alone. That’s over 30% more units than it sold in all of 2020. Many of those orders were placed with prepayment and will probably occupy Canaan’s manufacturing capacity for the rest of 2021 and beyond.

And a lot of those Bitcoin mining machines were bought by publicly traded companies. Late last year, Canaan shifted its client base toward public companies and Bitcoin-focused investment funds. They are more likely to place large orders and commit to long-term relationships between themselves and Canaan.

Thanks to Bitcoin’s surge in 2021,  Canaan is very optimistic about its future. You should be too.

The buy-in for Canaan is a bargain compared with the digital gold it’s selling picks and shovels for. At less than $10 per share, it’s a steal.

And again, you’re not buying crypto. You’re not investing in someone planning to mine it either. They have to buy the proverbial picks and shovels just to try. So you’re making a far safer investment than someone buying Canaan’s equipment. You’ll make money whether they’re successful or not.

The cryptocurrency revolution is here to stay. People thought Bitcoin was a flash in the pan that would disappear when it crashed in 2017. Now it’s close to tripling its high from before the crash. People are going to want a slice of that, and veteran miners will have more competition…

All of them will want the best equipment money can buy… and Canaan produces it.

Action to Take: Buy Canaan Inc. (Nasdaq: CAN) at market.

Legal Note: The Oxford Club is a financial publisher that does not act as a broker, dealer or licensed investment advisor. You should not consider any of the communications by our company and employees to you as personalized investment advice. Investment markets have inherent risks, and there can be no guarantee of future profits. Likewise, our past performance does not ensure the same future results. Any investments recommended by The Oxford Club should be made only after consulting your investment advisor and only after reviewing the prospectus or financial statements of the company.

Additionally, no person listed within our publications should be considered as permitted to engage in rendering personalized investment, legal or other professional advice as an agent of The Oxford Club. The Oxford Club does not receive any compensation for these services. Any individual services rendered to Members of The Oxford Club by those mentioned are considered completely separate from and outside the scope of services offered by The Oxford Club. Therefore, if you choose to contact anyone listed within our publications, such contact, as well as any resulting relationship, is strictly between you and the service provider.

We expressly forbid our writers from having a financial interest in their own securities recommendations to readers. All of our employees and agents must wait 24 hours after online publication or 72 hours after the mailing of printed-only publications prior to following an initial recommendation. The proprietary recommendations and analysis we present to Members is for the exclusive use of our membership. October 2021.